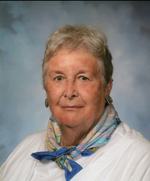 Alice Albert Nelson passed away on Thursday, January 21, 2021 following a brief illness. She was born on May 26, 1934 to Winifred and Robert Albert in High Point, North Carolina. She was graduated from Shelby High School in Shelby, N.C., and awarded a BA degree from the Woman’s College of the University of North Carolina in Greensboro, as well as a Masters’ Degree in Social Work from the University of North Carolina at Chapel Hill.
Following her graduation, she moved to Roanoke, Virginia where she worked with the Children’s Home Society as a case worker serving western Virginia. It was in Roanoke where she met her future husband, Lewis Mann Nelson, Jr., and they were married in 1962. She also served on the faculty of Hollins College as an associate professor where she lectured in sociology and social work. Later she became the initial Executive Director of the Virginia Western Community College Foundation.
Alice possessed a keen intellect as well as a sophisticated eye with respect to fine art, and served on the board of directors of the Roanoke Fine Arts Center, now called the Taubman Museum of Art. She was known for her extensive art collection, which included a number of French impressionist paintings and pieces from the House of Faberge, one of which is featured on display at the Virginia Museum of Art in Richmond, Virginia. She was also very involved in breeding, raising, and showing purebred Corgis, a number of which were champion dogs, and all of which were loved. Every year at Christmas she delighted her friends and family with gifts of homemade Moravian sugar cakes, a tradition carried on by her daughters today. She had a passion for knitting, a love for reading, and enjoyed spirited political discourse.
She was predeceased by her parents, as well as her aunt, Alice Lurcy, for whom she was named, her uncle, Georges Lurcy, and her uncle, Elwood Barbee. She is survived by her devoted husband of 58 years, Lewis M. Nelson, Jr., four children, Martha Nelson Kelley (Blaine) of Atlanta, Georgia, Gwyn Nelson Johnson (John) of Roanoke, Virginia, John Finley Nelson (Anastassia) of Sofia, Bulgaria, and Caroline Nelson Derifaj (Jason) of Cary, North Carolina, as well as eight grandchildren, Thomas Johnson (Logan), Anne Johnson, Lenoir Kelley, Frances Kelley, Gwyn Kelley, Sophie Nelson, Sarah Cowles Derifaj, and Audrey Derifaj.
In light of the pandemic, a small service will be held on Friday, January 29, 2021 at 11:00 a.m. at Second Presbyterian Church. Information regarding the service, including a live feed link, may be found at http://www.spres.org/worship/livestream/. In lieu of flowers, the family would suggest contributions to The Mountain Avenue Fund of Second Presbyterian Church, 214 Mountain Avenue, Roanoke, Virginia 24016, or a charity of your choice.
Arrangements by Oakey’s Roanoke Chapel and Crematory, 540-982-2100.