To share your memory on the wall of Charles Crumb, sign in using one of the following options:

A child of the Bay, Warner grew up on the Eastern Shore of Virginia in the towns of Cheriton, Oyster, and Cape Charles, graduating from Cape Charles High School in 1937. At the age of seventeen, he was called to and began preparation for the Christian Ministry, completing studies at Randolph-Macon College (Ashland, VA) and the Candler School of Theology at Emory University (Atlanta, GA). He served student pastorates in college and seminary and began full-time ministry on the Batesville Methodist Charge in Albemarle and Nelson Counties (VA), followed by the West Hanover Charge in Hanover (VA). In 1947, he met and married his devoted wife, Martha, with whom he shared his life and his ministry.

Warner was also a Chaplain in the U.S. Naval Reserves and was recalled to active duty at the time of the Korean War. Following two years with the U.S. Marines, he was appointed founding pastor of Wesley Memorial United Methodist Church at the University of Virginia in Charlottesville, VA. His ministry continued at Ramsey Memorial United Methodist Church in Chesterfield until he was named Administrator of the Hermitage Methodist Home in Richmond. His ministry there of eighteen years concluded with the building of a nursing wing, the Via Health Care Center. He was then named Director of Development for the Virginia United Methodist Homes system.

Warner’s life came full circle in 1983 when Bishop Robert Blackburn called him to his Cabinet as the District Superintendent of his beloved Eastern Shore. He served as DS for five years before retiring and moving to Roanoke, VA, where he served interim ministries at Melrose, Southview, and Boones Mill United Methodist Churches.

Warner’s ministry extended beyond the local church, serving on the boards and agencies of the United Methodist Church and several civic organizations. He was a member of the Board of Directors of the Charlottesville Chamber of Commerce, the Virginia Conference Credit Union, the Virginia United Methodist Foundation, and a Trustee of Virginia Wesleyan College and Ferrum College. He also served as Chaplain, Roanoke Chapter, and State Chaplain of the Military Order of World Wars (MOWW.)

In retirement, Warner enjoyed gardening, carpentry, extensive writing, and spending quality time with family, friends, and his dear cat, Oscar. He will be remembered for the 101 bluebird houses he built to give to family and friends and the thousands of letters he wrote. His deepest regret in life was to have never been a published author. For those of us who were the fortunate recipients of his many letters, his words will forever be published in our hearts.

Oakey’s Roanoke Chapel is assisting the family. A Celebration of Life will be held at a later date.
Read Less

There are no events scheduled. You can still show your support by sending flowers directly to the family, or planting a memorial tree in memory of Charles Warner Crumb.
Plant a Tree

Posted Feb 21, 2021 at 09:44am
Rev. Crumb was a customer of mine when I worked in banking. He was a wonderful man and always came with chocolates in his pockets for us. I got to know him very well and when my husband became disabled, Rev. Crumb was always in touch with me and kept my husband and me in his prayers. He even visited my husband many times in the nursing home. I received cards and letters from him with so much love and encouragement. I also received one of his bird houses. Rev. Crumb was a very special man and he will be missed.
Comment Share
Share via:
BM

Posted Feb 18, 2021 at 07:44pm
Growing up with Mr. & Mrs. Crumb right across the street was a blessing. My childhood memories are ones with him working in the garden, in the garage woodworking and playing with Oscar. I will never forget Mr. Crumb riding my bike down the street and the love and nurture he and Martha provided throughout my childhood. Our thoughts and prayers are with you all! -- the Herberger family ( Brittany, Charles, & Jeff)
Comment Share
Share via:

Posted Feb 14, 2021 at 11:48am
The Colozza family is so sad to learn about Warner's passing. He was the best neighbor and we missed he and Martha when they moved. Prayers to your family
Comment Share
Share via:
SD

Posted Feb 13, 2021 at 08:23am
I was so grateful to know Warner from his time as our District Superintendent on the Eastern Shore. He was very committed to doing his very best for our churches there. I remember his leadership in his building the district parsonage and office and went to the open house there. Warner was always friendly and interested in hearing how my family was doing whenever I saw him at Annual Conference. His life was one of service and my prayers are with his family who must miss him very much.

Posted Feb 12, 2021 at 08:10pm
Beth and Bob, I’m so sorry to hear of Warner’s passing, but what a long, full life he had! He was even at Southview the Sunday Emma was baptized. Our thoughts are with you. Jayne and Steve Vest
Comment Share
Share via: 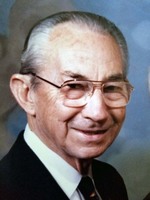