To share your memory on the wall of Christopher McGeorge, sign in using one of the following options:

Receive notifications about information and event scheduling for Christopher

Print
Visitation with body present and NO Services, followed by cremation. Family does want the Cremation Tribute center.

We encourage you to share your most beloved memories of Christopher here, so that the family and other loved ones can always see it. You can upload cherished photographs, or share your favorite stories, and can even comment on those shared by others.

Posted Aug 08, 2020 at 06:14pm
I met country when I was 16. Been friends ever since. My heart breaks for his family. He was the light of my world. I can’t imagine a day with out him in it. We talked about gardening, puppies, cooking and everything in between. Was there when he bought his house. There for every milestone of school and life. He will be truly missed. ❤️❤️❤️
My condolences and prayers to his family.
Comment Share
Share via:
RM

Posted Aug 07, 2020 at 08:58pm
I met Chris while working at GE. He was a kind friend and that kind of coworker that helped you get through the day - I am incredibly saddened to hear about his passing. I will miss our catch ups at all sports and hate that we hadn’t connected in sometime. Chris was truly a guy to remember!
Comment Share
Share via:
DB

Posted Aug 07, 2020 at 07:22pm
I met Chris through work and always had nothing but positive experiences with him. He certainly lightened the mood around the office and was a pleasure to chat with. He loved to laugh and make others laugh. Chris had a friendly sarcasm about him that always left you smiling. When he first came to work I gave Chris a jacket I had that didn't fit me. He was sure to tell me how warm it was when he had to shovel snow. I am glad I was able to return a small amount of the happiness that Chris brought to the office. I am sad that working from home limited our ability to spend more time with Chris this year. "Normal" will never be the same again. I will miss him.
Comment Share
Share via:
BL

Posted Aug 07, 2020 at 11:01am
My deepest condolences to Chris' family. This news has absolutely floored me. I met Chris a number of years ago. As a devout Chicago Bears fan, Chris and I were, of course, drawn together. Always talking smack to each other. Me wishing Aaron Rodgers would break a leg. Chris offering sarcasm dripping faux sympathies that my Bears would once again lose by another Rodgers last minute pinpoint pass over the top of the Bears weak defensive coverage. Myself, along with 2 other mutual friends, (a Lions and Vikings fan), could always agree on one thing. While all of our teams were in the NFC North, and we hated each other teams, especially when playing each other, the 3 of us all hated the Packers the most! And while we might have hated the Packers, we all sure loved Chris!!! Football will never be the same. I am going to miss you, Country!
Comment Share
Share via:
J

Posted Aug 07, 2020 at 10:06am
Mark
I am so sorry to hear about Chris' passing.
Will keep you and his family in my prayers.
Kathy and John Mundy
Comment Share
Share via:
RH

Mark - I'm so sorry to hear of Chris's passing...I know you could not have loved him anymore if he were your own! Worse part of this getting old thing is dealing with the passing of loved ones, and you (and Chris) definitely know all about that. Take good care buddy and know I'm thinking of you and wishing you the best! Robin 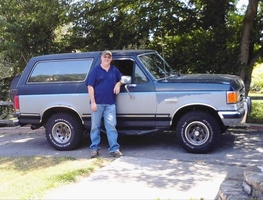