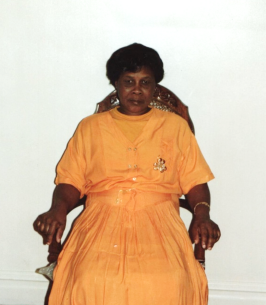 Clermelie Saint-Elot was born on February 8, 1935 in Acul Basse Terre, Haiti. Her father was Charles Saint-Elot, and her mother Rezillia Louissaint. She was the middle of nine children. In Haiti, she received apprenticeship in tailoring and later became a professional Tailor. On September 15, 1990, she migrated to the United States at the age of 55. She settled in Roanoke, VA, establishing strong roots and connections in the community.

Clermelie was well known for her exceptional sense of hospitality, hard work, and for being a “cordon bleu.” For 12 years she worked as Assistant Chef at the Hidden Valley Country Club in Roanoke, VA.

Clermelie became a follower of Christ during her early years in life, regularly attending church services. She later committed her life to Christ and was baptized with the baptism of the Holy Spirit, serving the Lord with passion for the rest of her life. She was a member in good standing of the Mount Olives Church of God in Roanoke, VA under the leadership of Pastor Antoine Fontus.

Clermelie and the late Elibreuil Balisage welcomed seven children together over the course of a long-term union. She is survived by six of her children: Marie Mona Balisage, Mikerlange Jeune, Ghislene Raoul, Schiller Balisage, Guy Balisage, and Carline Eloi, as well as her brother Bonny Saint-Elot. She leaves behind 25 grandchildren and 16 great-grandchildren, including a host of nephews, nieces and friends, who loved her dearly.

Clermelie Saint-Elot will be greatly missed by those who were fortunate to know her. She will continue to live on in all those who have been touched by the love, strength, conviction, wisdom, and beauty of her soul.

We love you Clermelie, you truly were a special woman, your warm beautiful indelible smile will continue to live in our memories. You may have passed on, but your memories will always live on within us