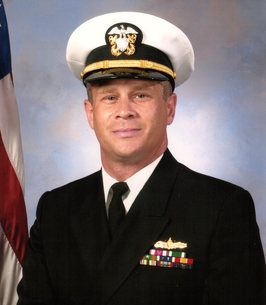 Craig Sherwin Givens
Commander Craig Sherwin Givens, United States Navy Retired of Newport News, Virginia, formerly of Perrysburg, Ohio, 57, went to the Lord on April 1, 2022 after a courageous battle with ALS. Craig was born January 3, 1965 in DeKalb, DeKalb County, Illinois to Clyde Straley Jr and Nathalie (Strong) Givens. In 1969 the family moved to Somers, Westchester County, New York where he attended Preschool and then Primrose Elementary School. The family moved in June 1973 to Perrysburg, Wood County, Ohio. He attended Elm Street Elementary School (now Toth Elementary School), Perrysburg Middle School, Perrysburg Jr High School and Perrysburg High School. He played in Big Red Football and Jr High Football. In High School he lettered in Wrestling, Football and Track. On the track team he was a pole vaulter. Craig was a member of the National Honor Society and graduated in 1983. He received a Navy R.O.T.C. full scholarship to The Ohio State University. He was a member of Alpha Gamma Rho (AGR) fraternity and graduated in 1988, with a B.S. degree in Finance. He received additional schooling at Naval Post Graduate School from 1993 to 1995 in Monterey, CA, receiving a B.S. and M.S. in Electrical Engineering. In 1996 he attended Department Head School in Newport, RI. After graduation from The Ohio State University, he was commissioned an Ensign in the US Navy and served 20 years retiring in 2008. His duty stations included: San Diego, CA; Philadelphia, PA; Newport, RI; Monterey, CA; Yokosuka, Japan; Earl, NJ; Norfolk, VA and when he retired as a Commander in 2008, he was an instructor at Dam Neck, VA. He served during the 1st Gulf War, Operation Enduring Freedom and Operation Iraqi Freedom. He served a tour as Executive Officer on the USS Seattle (AOE 3), a supply ship that went out with the USS John F Kennedy battle group during Operation Enduring Freedom. During Operation Iraqi Freedom he was the Chief of Staff to the Commander, Destroyer Squadron 22 that went out with the USS Harry Truman battle group.
Since retiring he has worked as electrician and carpenter’s helper for a home remodeler until he became ill with ALS.
Craig was a past state officer for Ohio Society Children of the American Revolution, aging out at age 22. He was a member at large of the Ohio Society Sons of the American Revolution. He was a member of Fallen Timbers Chapter of DeMolay.
Craig was preceded in death by his father, Clyde Straley Givens, Jr., Uncle Clarence B. Givens and Aunt Pamela Strong Whitmore. He is survived by his mother Nathalie Elizabeth Strong Givens of Daleville, VA, sister Diane Josephine Givens Dunkelberger and her husband Richard D. Dunkelberger of Groveport, OH and nephew, Kevin Austin Dunkelberger. Also by his Aunt Karolyn Givens, Uncle Carroll T. and Aunt Toy Givens, and Aunt Ruth Givens, his housemate Dean Nollinger, many, many cousins and his canine companion Layla. The family would also like to thank all of Craig’s neighbors, friends and caregivers who helped with his care during his illness.
Visitation in Roanoke, Virginia on Sunday April 10th from 6pm – 8pm for family and friends at Oakey’s East Chapel.
An Open House in Newport News for neighbors, friends, family and caregivers will be at his home sometime in the future
Burial will be at Ross Cemetery, Craig County, Virginia with graveside services on Monday April 11th at 11am followed by a military farewell.
In lieu of flowers, memorials may be made to the ALS Society of DC/MD/VA Chapter, 8100 Three Chopt Road, Suite 147, Richmond, VA 23229 or to the donor’s choice.
“Fair Winds and Following Seas”