To share your memory on the wall of Delton Jessup, sign in using one of the following options:

Rabon grew up on a dairy farm in Laurel Fork, Virginia. After graduating high school he served two years in the United States Army and married his... Read More
Delton Rabon Jessup, 86, of Roanoke, Virginia, passed away on Thursday, January 21, 2021.

Rabon grew up on a dairy farm in Laurel Fork, Virginia. After graduating high school he served two years in the United States Army and married his wife Beverly. Together they raised three sons, who with their families became his greatest earthly joy. Rabon served in the Virginia State Police for 31 years, retiring as a lieutenant in 1993. His hobbies were small engines, flying, gardening, and sports. Most important was his relationship with God, through Jesus, and daily reading of his Bible.

A Funeral Service will be held at 11 a.m. on Saturday, January 30, 2021 at Oakey’s Roanoke Chapel, 318 West Church Avenue, Roanoke. Friends are invited to visit with the family for one hour prior to the service. Interment will follow in Evergreen Burial Park.
Read Less

Receive notifications about information and event scheduling for Delton

We encourage you to share your most beloved memories of Delton here, so that the family and other loved ones can always see it. You can upload cherished photographs, or share your favorite stories, and can even comment on those shared by others.

Posted Feb 02, 2021 at 09:32am
Lieutenant Jessup was my Father's State Police Supervisor. He was respected by my Dad. We appreciated "Jessup's" support during my Dad's battle with A.L.S. and for his participation at my Dad's funeral back in 1986. I send my thoughts and prayers to his family at this time. Linda Mercer Royal
Comment Share
Share via:
IF

Posted Jan 29, 2021 at 08:53am
You all are in our thoughts and prayers. May God keep you wrapped in His arms of comfort and peace in the coming weeks.

Posted Jan 28, 2021 at 12:00pm
Dear Jessup Family, We are praying for you all during this time. May God give you peace beyond all understanding.

Posted Jan 23, 2021 at 05:08pm
Thank you for your loved one's faith and his service to our nation and commonwealth. God be with you all during this time.
Comment Share
Share via:
W

Posted Jan 23, 2021 at 04:16pm
So very sorry to learn of Rabon' s " home going".
I enjoyed working with him when he was working part-time, for DMV, after retirement from State Police. We shared so many memories.
My deepest sympathy to the entire family. You are in my thoughts and prayers at this sad time.
Hope to see you soon. 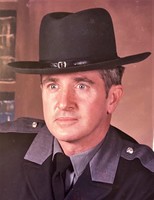