To share your memory on the wall of Dorothy Peters, sign in using one of the following options:


Didi was born to a family of pioneer stock on December 29, 1928, after her mother was hit by a car in South Bend, Indiana. Her survival as a newborn was uncertain, but soon Didi grew into the beloved troublemaker among her seven siblings. Didi was a child of the Depression, and her family was forced to move frequently to follow her father’s employment opportunities, but this experience brought adventures to her and her siblings that Didi often fondly remembered, including a summer spent working in a carnival near St. Louis. After the family had settled in Bellevue, Illinois, with her father operating a small airport, Didi was awarded a scholarship to study at St. John’s Lutheran Academy in Winfield, Kansas, where she and her female classmates were referred to as the “naughty nine.” After graduating from high school, Didi left on a trip to visit her elder sister, Janet, at her new home in Virginia. Although she was later supposed to continue her scholarship at St. Johns College, she boarded the train to Virginia without intending to return to her life in the Midwest, and thus began to build her life on a foundation of independence that would last her more than 70 years.


This wasn’t the easy way out. Didi began her career as a teacher at age 18, and later began studying nights and weekends to get her first college degree, which she finally received from Roanoke College in 1961, at the age of 32. During that time, she also married James Robert “JR” Peters and gave birth to their son, James “Jim” Peters. While raising Jim, Didi rose through the ranks of school administration, overseeing the bussing efforts to racially integrate Roanoke City Schools, and began work on her master’s degree, which she received from Radford University. After her divorce from her husband, Didi joined the first class of doctoral students that accepted women at the University of Virginia, and battled through the male-dominated culture of the University to receive her doctorate in 1980, at the age of 51.


Didi broke glass ceilings for women in education administration throughout her life. She worked in the Virginia Educational System for much of her career, holding positions in Petersburg, the Eastern Shore, and Winchester, finally ending her career in Virginia as the assistant superintendent of education for Frederick County Public Schools. But Didi wasn’t finished: soon after, she accepted a job as the chair of the education division at Alice Lloyd College, a work-study school in Pippa Passes, Kentucky. The days Didi spent at Alice Lloyd are some that she remembers most fondly, often describing them as the crown jewel of her work experience and her way of giving back to the Appalachian community after so many years living and working in southwestern Virginia. Didi retired for good in 2005 and returned to Roanoke, after spending more than 30 years away.


Didi always said she wanted to wear out, rather than rust out. After returning to Roanoke, she kept in close contact with her former students, made new friends, spent more time with her family, and took on a mentoring role to many young people. She met people everywhere and could talk to anyone, counselling anyone who would listen that education could change their lives for the better, as it had for her. As her family grew older, they spread out to homes in new places, using their education as their opportunity to open doors and better their own lives, just as Didi had before them. Though we shared many happy holidays and visits together in her final years, we were kept painfully apart during her final days, relying instead on the memories of her guidance to us and reflecting on how she had so profoundly affected our lives, as she had to so many others. Didi left this world independently, ending her life as she had lived it, knowing that we were close to her because she had helped lead us to our independent lives, full of love for our roots and our family. She will be deeply missed by her family, her friends, and her students, who will all carry on her heritage of compassion, philanthropy, and a fondness for learning.


Didi is survived by her brother, Arthur Hasson; her son, James G. Peters; and her two grandsons, Bradley and Alexander.


Online condolences may be shared with the family by visiting www.oakeys.com.
Read Less

To plant a memorial tree in honor of Dorothy Peters, please visit our Heartfelt Sympathies Store.

Receive notifications about information and event scheduling for Dorothy

There are no events scheduled. You can still show your support by sending flowers directly to the family, or planting a memorial tree in memory of Dorothy Peters.
Plant a Tree

We encourage you to share your most beloved memories of Dorothy here, so that the family and other loved ones can always see it. You can upload cherished photographs, or share your favorite stories, and can even comment on those shared by others.

Posted Sep 19, 2020 at 02:10pm
I was also one of Dorothy’s neighbors when she lived in The Lawn neighborhood. She was a very vibrant person, passionately dedicated to education, and she and I had many conversations about our experiences as teachers. She was also committed to liberal political policies to improve the lives of others and to the care of animals, especially those who had had bad beginnings to their lives—two interests I also shared with her. She was a remarkable person and she lived a full life.
Comment Share
Share via:
G

Posted Sep 16, 2020 at 02:20pm
We were neighbors for 16 years. I would have to write a book to share all the memories I have of her and our times together over a cup of tea. The discussions we had were priceless. To have known her was an honor. I loved watching her beloved grandsons grow into fine young men, and I appreciated the many kindnesses her son Jim bestowed on our family, including taking my husband flying and letting him fly the plane when he was well into his 80’s. I am certainly richer for having known her. I particularly appreciated her commitment to children who had less than others and how she made sure that they had growing experiences they would not have had otherwise. So long, my friend....
Glenda
Comment Share
Share via:
L

Posted Sep 15, 2020 at 02:09am
Dr. Peters was such a wonderful person. I just learned today of her passing. I am one of those people she mentored and helped me in so many ways. My condolences to the family and sending love. She will be greatly missed.
Comment Share
Share via: 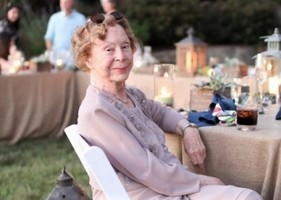