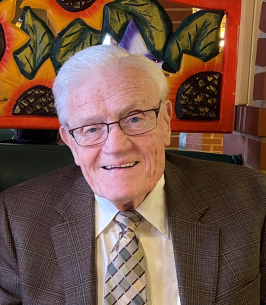 He is survived by his wife Pat; his children, Scott Richardson (Beth), Anne VanWaes (Carter) and Sheryl French (Michael); twelve grandchildren; a great-grandson; his brother-in-law, and several first cousins, all of whom will miss him dearly.

Ted was raised in Roanoke, graduated from Jefferson High School in 1951, and went off to Virginia Tech (then VPI&SU) in the Corps of Cadets and studied Mechanical Engineering. After graduating in the class of ’55 and spending time on active duty in the Army, he moved to Michigan to work for Ford Motor Co, where he spent his entire career. Ted loved every minute of his time with Ford, becoming an Executive Engineer. He worked many aspects of Ford, including working with the Mustang development team with Lee Iacocca, but the last 15 years at Ford he was in Automotive Safety. Ted was an active member of the Detroit Chapter of the Society of Automotive Engineers International (SAE International). He served as President for 3 years and helped execute the largest indoor car show, including a sit-down dinner for over 5,000 attendees, at Cobo Hall in Detroit, a major undertaking, at which Henry Ford II was a guest of honor.

Ted met his wife Pat at Cherry Hill Presbyterian Church in Dearborn, MI where they were both in the choir. They were married in 1980. After having some health problems, he retired and Pat and Ted moved back to his beloved mountains in Roanoke. They continued to be active in church work at First Evangelical Presbyterian Church, including singing in the choir. Ted also served as a member of Session as an Elder of the church.

Ted and Pat loved music and were patrons of Symphony Orchestras wherever they lived. Ted had an extensive collection of classical music, which was nearly always playing. He loved working in his huge home shop and always had ongoing projects, such as building clocks and fixing most anything. Ted loved the mountains surrounding the Roanoke area and no family gathering was complete without a hike up one peak or another. He and Pat loved to travel to near and far off places. They took many coast to coast driving trips, including driving to Alaska, and visiting both Canada and Mexico. They also loved international travel, took many cruises, visited the Holy Land, the North Pole, and a trip down the Amazon, just naming a few of the exciting places they visited together.

Ted’s love of cars extended back to his young teens, owning various moving vehicles, even a Crosley into which he put a large Ford engine. His special find was a red 1957 Ford Thunderbird. He had been on the look-out for that particular model year and when he saw it advertised, he jumped up and phoned the owner. The result, he bought it! It turned out to be the perfect car for a tinkerer! He also had what Pat called his “secret hobby”, riding and owning several motorcycles. He loved riding them on the mountain roads, enjoying the fresh air and those twisty, curvy roads, especially between Roanoke and Blacksburg.

Ted was a gentle man with a wry sense of humor, who loved his family, loved the Lord, and yes, loved Ford Motor Company! He will be missed by all who knew him!

The family wishes to thank the doctors and nurses at Carilion Roanoke Memorial Hospital, the staff at Richfield Living Health Center and Good Samaritan Hospice for their compassionate treatment of our dear loved one.

Ted was strongly committed to his Lord and his church. He personally supported the church’s missions throughout his life. The family asks that if you are so moved, make a donation to his beloved church in his memory. Memorial donations can be sent to First Evangelical Presbyterian Church, 2101 Jefferson St SW, Roanoke, VA 24014.