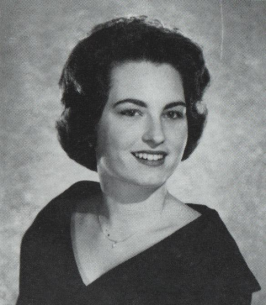 Daleville, VA – Eula Ligon Rosenberger, 80, passed on Saturday, January 29, 2022 at The Glebe in Daleville, Virginia. Born June 19, 1941 in Roanoke, VA, she was the daughter of the late Eula Transou Ligon and Richard Henry Ligon. She was preceded in death by her husband Russell Lee Rosenberger in 2021.

One of her childhood milestones was attending the dedication of the Mill Mountain Star in 1949, where her mother led the choir group as part of the ceremony. A graduate of Jefferson High School in Roanoke, she later graduated from Converse College in Spartanburg, SC in 1963 with a degree in political science. Her early work in Winston-Salem included real estate brokerage and a catering service.

After her time in North Carolina, she returned to Roanoke and Botetourt County, where she was active as a volunteer at St. Mark’s Episcopal Church in Fincastle and the Community School in Hollins. She later worked for the Explore Park in Roanoke, Center in the Square, the Roanoke Regional Partnership, the Botetourt Chamber of Commerce and the Roanoke Chamber of Commerce, before she retired in 2014. She loved meeting new people, attending musical events like the Roanoke Symphony, and playing bridge with friends at the Glebe.

Her main passion in life was her three children, who all survive her. Stephen W. Daves and Christina of Gainesville, VA, Arthur C. Daves and Heather of Hailey, ID and E. Kelly Patrick and Adam of Atlanta, GA. She is also survived by her five grandchildren Justin Daves, Megan Daves, Ethan Daves, Alex Daves and Laura Daves.

Funeral arrangements are provided by Oakey’s Funeral Service Roanoke Chapel. A memorial service will be held on Saturday, April 9 at 10:30 am at St. Mark’s Episcopal Church, 111 S. Roanoke Street in Fincastle, VA, officiated by Rev. Willis Logan, with a reception following at The Glebe in Daleville.

In lieu of flowers, memorials and donations may be given to St. Mark’s Episcopal Church in Fincastle (stmarksfincastle.org), WVTF Public Radio in Roanoke, or the Community High School in Roanoke.

Arrangements by Oakey’s Roanoke Chapel (540-982-2100). Online condolences may be expressed to the family by visiting www.oakeys.com.