To share your memory on the wall of Frank Magann, sign in using one of the following options:

Frank Wingfield Magann, 74, finished his earthly course on Tuesday, January 12, 2021 after a short battle with COVID-19. He was preceded in death by his parents Douglas Jr. and Charlotte Magann and his faithful feline companion, Tiger.
Surviving are his brother, Douglas Magann of Orlando, Florida; a niece, Shannon Magann Johnson; nephews, Garrett Magann and Lee Smith; his beloved friend and companion, Ramona Magann and a special group of friends who supported Frank and celebrated times with him throughout his almost four years at the Virginia Veterans Care Center [VVCC], Terry Hostutler, Mitzi Willingham, Daffy Agner, Rhonda Hamed, Dru Adler and the late Anne Weaver.
Frank was a lifelong resident of the Roanoke area. He served in the United States Army and was a Vietnam Veteran. He was a graduate of Patrick Henry High School, completed his undergraduate degree at Roanoke College, received his MBA from Lynchburg College and was a graduate of the Mendenhall Auction School. He was a realtor, an auctioneer and an entrepreneur.
It has been said that you can tell a lot about a man by the way he treats his mother. Frank’s care for his mother during her later years was remarkable and completely unselfish.
We wish to give special thanks to Tammy and the wonderful staff at 2 East, Virginia Veterans Care Center, for the care and support they showed Frank.
Frank was laid to rest in a private interment at Evergreen Burial Park in Roanoke. Online condolences may be shared with the family at www.oakeys.com.
Read Less

To plant a memorial tree in honor of Frank Magann, please visit our Heartfelt Sympathies Store.

Receive notifications about information and event scheduling for Frank

We encourage you to share your most beloved memories of Frank here, so that the family and other loved ones can always see it. You can upload cherished photographs, or share your favorite stories, and can even comment on those shared by others.

Posted Jan 16, 2021 at 08:14am
I will always cherish celebrating Frank’s birthday...., with a very loving, compassionate group of “Frank’s Girls” rest in peace friend.
Comment Share
Share via: 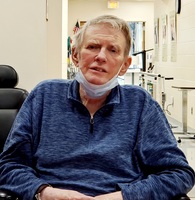