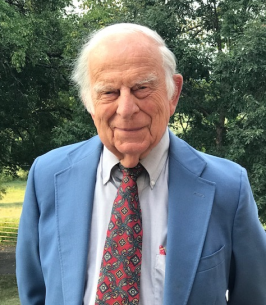 Our father, George Andrew Kegley of Roanoke, Virginia, passed away in his sleep on Wednesday, February 16, 2022, at Lewis Gale Hospital after a brief illness.

He lived 93 exceptional years, through his writing for the Roanoke Times for 44 years, historical and church publications, and most importantly, volunteering beyond the norm for so many good causes, touching the lives of far more folks than we will ever know.

As Robert Frost wrote in “After Apple Picking,” But I am done with apple picking now. Essence of winter sleep is on the night, The scent of apples: I am drowsing off.

Dad never knew an apple that wasn’t a friend nor worthy of pressing into cider. Many friends and family assisted with cider making over the years.

The Graveside Service will be conducted at 11 a.m. on Monday, February 21, 2022, at St. John’s Lutheran Church Cemetery in Wytheville, Va. A celebration of his life will be held at St. Mark’s Lutheran Church at 4:00 pm on April 29th, 2022, a reception will follow at the Shenandoah Club.


Memorials in George’s name may be made to Blue Ridge Literacy, Roanoke Area Ministries (RAM House), St. Mark’s Lutheran Church, and The Historical Society of Western Virginia. Online condolences may be shared with the family at www.oakeys.com.