To share your memory on the wall of Glen Conrad, sign in using one of the following options:

Judge Conrad received his undergraduate degree from the College of William & Mary in 1971 and his law degree from the College’s Marshall-Wythe School of Law in 1974. During his time at William & Mary, he worked at Colonial Williamsburg and became an honorary member of the Tillotson family. Rex Tillotson introduced him to the rewarding challenges of leadership in administering the Virginia Boys State program, Mary Alice was his “mom away from home,” and the “Tillotson girls” were the only sisters he ever needed.

While at William & Mary, Judge Conrad became better acquainted with his future mentors and colleagues, Judge James C. Turk and Judge Ted Dalton. He proceeded to spend his entire legal career with the United States District Court for the Western District of Virginia. After serving as a probation officer and law clerk, he was appointed as United States Magistrate Judge in 1976. He served in that capacity in the Abingdon, Charlottesville, and Roanoke divisions until 2003, when he was confirmed as United States District Judge, after having been nominated by President George W. Bush. He served as Chief Judge from 2010 to 2017. He assumed senior status in December of 2017 but continued to maintain a full civil caseload.

Throughout his career, Judge Conrad was highly regarded for his kind and patient temperament, keen intelligence, and abiding sense of fairness. He was a teacher and mentor to many young attorneys, including his law clerks and others he met through the Ted Dalton American Inn of Court. He considered his law clerks and other members of “Team Conrad” to be family and held them dear to his heart, bestowing nicknames on many of them and earning a few of his own.

Although his extended court and college family spreads across the country, Judge Conrad remained in touch with each member and often visited them in person or by phone or email. His travels with his beloved Mary Ann also took him all over the world, cruising the rivers of Europe, exploring castles, sampling single malt scotch with lifelong friends, and making new friends along the way. He will be deeply missed by everyone who knew him.


He attended both Grandin Court Baptist Church in Roanoke, and Duck United Methodist, in the Outer Banks, considering both places home.

In addition to Mary Ann, he is survived by his friend and caregiver, Brenda VanLear. He also leaves behind two long-time employees: his courtroom deputy, Susan Moody, and his career law clerk, Jennifer Willis.

Special thanks are extended to everyone who visited, called, and wrote Judge Conrad and Mary Ann during his final days. He left knowing that he was dearly loved.

To plant a memorial tree in honor of Glen Conrad, please visit our Heartfelt Sympathies Store.

Receive notifications about information and event scheduling for Glen

We encourage you to share your most beloved memories of Glen here, so that the family and other loved ones can always see it. You can upload cherished photographs, or share your favorite stories, and can even comment on those shared by others.

Posted Jun 03, 2021 at 02:50pm
Dear MaryAnn,
My initial encounters with Judge Conrad occurred iwhen I appeared before him in the courtroom in Charlottesville and Roanoke. I always found him to be thoughtful, fair, and patient, and enjoyed arguing cases before him. Then, a couple of years ago, my husband Chip and I rented a home in Caffey's Inlet, and Chip informed me that while walking our dog, he had met a lovely woman and her dog, and that you all thought I might know her husband. Imagine my surprise when I discovered just who our neighbor was! You and Judge Conrad were so nice, and invited us over for drinks during our stay. We enjoyed getting to know you both better. I was very saddened to hear of his passing. I wish you peace and comfort through the coming days, and please know that you are in our thoughts and prayers.
Melissa & Chip Riley
Comment Share
Share via:
RD

Posted Jun 02, 2021 at 11:14am
Dear Mary Ann,
I want to offer my deepest sympathy and condolences in the passing of your beloved husband Glen.
It had been a good while since I talked with him and ya'll were in Duck at the time and he explained his health problem. As you may recall I grew up with Glen in Radford and I always considered him a dear friend and I was privileged to know his wonderful parents as well. As you know better than anyone, Glen was smart, witty and relentlessly competitive. We loved to play hearts at Boys State and he and I restarted a "world series of chess matches" once I returned to Virginia to work for the fish and game. I know he is smiling down knowing that he was ahead 16 to 14 on wins! He was the better player and the better man. He had a good life and his life was enriched by having you at his side. You two were great partners!

Posted Jun 01, 2021 at 01:13pm
Carson and I were saddened to learn of Glen's passing. He was a fine man who will be greatly missed. Please know that you are in our thoughts and prayers during this difficult time.
Carson & Sandy Hamilton
Comment Share
Share via:
HW

Posted May 29, 2021 at 10:27pm
I was so saddened to hear of Glen's illness and passing. I cherish all the years of working with him through American Legion Boys State, beginning at William & Mary. Mary Ann, you have my deepest sympathy.

Posted May 29, 2021 at 07:00am
We were so sorry to hear that Judge Conrad passed away, but we know that he’s now in Heaven and his earthly trials are behind him. He was such a nice person and we always enjoyed seeing him and Mary Ann at the early service at GCBC.

May God bless and comfort Mary Ann in her loss. 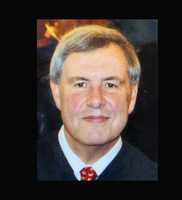