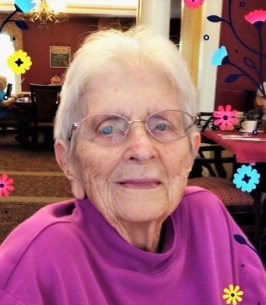 She was predeceased by her husband, Price A. Grisso Sr.

Harriet was born on November 6, 1917, in Winton, North Carolina, where she grew up helping her father, Arthur, care for her siblings, sister, Frances, and brothers, Robert and Turk, after their mother, Evelyn, died when Harriet was 12. Caring for people became a life-long mission as she graduated from Norfolk General Hospital and became a registered nurse. At Norfolk General she met a handsome patient, Price Grisso of Roanoke, Va., who was working as an electrician at the Norfolk Naval Shipyards during the end of World War II.

On July 17, 1945, they were married in Winton, N.C. and subsequently moved to Roanoke. There, Harriet and Price settled in the Back Creek area and raised their children. Harriet worked at Lewis Gale Hospital as night nursing supervisor for 37 years. She enjoyed gardening, canning, playing bridge and traveling after she retired, especially trips with her sister-in-law, Alice Newsome (Turk’s wife) and their three daughters, Kathy, Elizabeth, and Susan.

Even after retirement Harriet continued her mission of nurturing by volunteering for local health screenings and donating blood and platelets to the American Red Cross. A long-term member of Cave Spring Methodist Church, Harriet relished the connections she made with her church community. A Master Gardener, she enjoyed her fellow gardeners, friends, nursing associates and extended family, especially Kim Hurd, her caregiver for several years in her later life. Even in her last days she kept us laughing by finding ways to make light of her infirmities and limitations. More than anything else she enjoyed her family and her lofty position as matriarch; we are blessed to have had her in our lives and will miss her immensely.