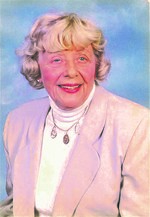 Irmgard Cecilia Hawranek Salten, “Irmchen,” passed away in Roanoke, Virginia on Sunday, August 30, 2020 at the age of 95.

Irmgard was born in Gelsenkirchen, Germany in 1925 to Emma and Al Hawranek. She grew up in Gelsenkirchen with her sister, Liselotte, to whom she remained close throughout her life. After World War II, she married her childhood sweetheart, Norbert Salten, and they were blessed with a daughter, Evelyn “Evie” Salten Shura. In 1955, Irmgard, Norbert, and Evie emigrated from Germany to Sherbrooke, Quebec, Canada where they lived for many years. In the late 1960s, the Saltens emigrated again, this time to Richmond and subsequently Chesapeake, Virginia. In those years, Irmchen embraced life in the United States and eventually became a proud U.S. citizen. After Norbert retired, the couple moved to Roanoke to be close to their daughter and grandchildren.

Irmchen and Norbert enjoyed nearly 50 years of loving, devoted marriage. They lived life to the fullest, traveling together and exploring the country, as well as spending quality time with their beloved grandchildren. Irmchen was a talented hostess, and especially enjoyed preparing traditional German sweets for her family and friends. Over the years, Irmchen dedicated many cheerful hours of volunteering to the Red Cross, the Ronald McDonald House, and Good Samaritans. In the years after her husband’s death in 1995, she took an interest in pottery lessons and participated in a German singing group, performing traditional songs around the Roanoke area. Irmchen always looked forward to her weekly rotating cocktail parties with her neighbors, who became like extended family to her.

Irmchen enchanted everyone who met her and brought happiness and laughter to every occasion. She was a truly beautiful person and her warm, sunny nature was contagious. Despite enduring many hardships during and after the war and later the devastating loss of her husband, Irmchen remained strong and never ceased to be optimistic. Irmchen’s greatest joy in life came from spending time with her family and friends. She treasured her visits to see her sister and niece in Germany. She had an especially close relationship with her daughter and three grandchildren, who feel blessed to have had so many wonderful years with her. Irmchen stayed sharp and engaged until the end of her life, and her grandchildren and great-grandchildren will cherish the memories they shared with their much-adored Oma/Great-Oma.

Irmgard Salten was preceded in death by her parents; sister; and husband, Norbert. She is survived by her daughter, Evelyn (Bob) Shura; grandchildren, Cornelius Kinsey, Macye Maher (Alex), and Asheley Kinsey (Catherine); as well as her great-grandchildren, Beckett, Harper, and Leisel Maher and Evelyn and Davis Kinsey.

The family will hold a memorial service at a later date. In lieu of flowers, donations can be made to Good Samaritans Hospice, 2408 Electric Road, Roanoke, VA 24018, or at the website www.goodsam.care. Online condolences may be shared with the family by visiting www.oakeys.com.