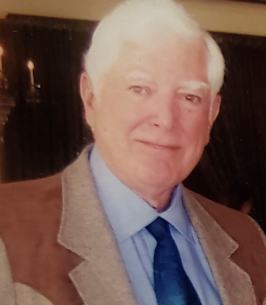 Jasper Felix Goodrum III, 84, of Hollins, passed away peacefully with family by his side on Sunday, December 26, 2021.

Felix was born in Lexington, NC, son of the late Jasper F. Goodrum, Jr and Virginia Dare Fritts Goodrum. He is also preceded in death by his brother, Marlet “Rock” Goodrum.

Felix proudly served his country in the US Marine Corps. During his service, he traveled to 43 countries while stationed on the USS Essex and served as bodyguard to the Captain. He trained as a recon marine with a specialty in cold weather survival. This made him the “hardhead” jarhead his family loved still.


He worked for Binnings Windows for over 40 years and a partner in TUGG Land. He became fast friends with many of his clients and colleagues. He had an incredible ability to connect with others. He was admired for building deep and lifelong friendships to which he generously gave his attention and affection.


Felix had a passion for adventure. He was an avid mountaineer, through which he developed a love and eye for photography. He cherished time on the Appalachian Trail and peaks as far as Mt. McKinley (Denali). He loved telling stories of challenges confronted from crossing snow-covered crevasses to bears stealing knapsacks. He delivered a key to the City of Roanoke to the summit of Denali in 1977.

Felix was also enthusiastic about Native American art and culture; he made many friends in the Cherokee, Crow and Lakota nations. He was a collector of fine books, particularly the works of Ernest Hemingway and Carl Sandburg. After retirement, Felix became a true artist in practicing wood carving. His tree bark cottages and walking sticks became gifts for his family and friends everywhere.

He is survived by his beloved wife of 32 years, Denise; his children, Felicia Dare Sterling (Andrew), Chas Goodrum, Derek Cundiff (Christy), Jon Reynolds (Leslie); sister, Ann Lippard (Jim); eight grandchildren and numerous cousins, nieces, and nephews. He was a hard-headed marine to the end, with edges softened and honed over the years by the love of his wife.
In lieu of flowers please consider a contribution in his memory to St. Labre Indian School, Red Cloud Indian School, the Marine Corps Heritage Foundation or Star City Greyhounds.

A Memorial Service will be 10 a.m. Saturday, April 23, 2022 at Oakey’s North Chapel .
For those who cannot attend, we will be live-streaming the service. Click on the link below to view the service.
https://view.oneroomstreaming.com/authorise.php?k=1650665983180045