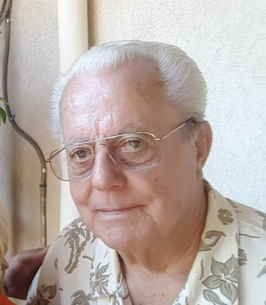 TRAMPUS, Joseph William, known as “Joe”, age 88, formerly residing in Yucaipa, California passed away Wednesday, August 24, 2022 in Roanoke, Virginia. He was born of German descent in San Pedro on July 9, 1934 and was a gymnast in high school before graduating from Nathaniel A. Narbonne High School in 1953. He went on to receive an Associate in Arts Degree, studying petroleum, from Los Angeles Harbor Junior College, June of 1955 where he met his first wife, Delores. He was married to Delores Rachel Knuutila in September 1955 and had three children Jerry, Kathy Sue, and Stephen. Delores died of cancer in 1978 and Joe remarried in June 1981 to Lillian Yvonne Horne (Bonnie) at Lake Tahoe, Nevada. Joe followed in his father’s footsteps and became a longshoreman at the Port of Los Angeles. His passion focused on his work, and he advanced to Foreman in charge of a crew who loaded and unloaded ships from around the world. His career spanned 43 years, retiring in 1996 and moved to Lake Isabella where he enjoyed many years of traveling, hunting, collecting guns and spending time with his close friends and family.
Later in life, Joe moved to Yucaipa in 2014 to live with his daughter, Kathy until additional medical care was needed for his Alzheimer’s disease and physical health, and he was moved into memory care.
Joe was preceded in death by his parents, Joseph Peter Trampus and Katie Kirchner Trampus, his first wife, Delores Knuutila Trampus, his second wife, Lillian Yvonne Horne Trampus, and his sister, Helen Catherine Monfalcone.
Joe is survived by his son, Jerry William Trampus and wife, Kyle, one grandchild, Nicole Compton and three great-grandchildren, Kyler, Phoenix and Cali. He is survived by his daughter, Kathy Sue Stark, four grandchildren: Randy Stark, James Stark, Shelley Jones, and Jeffrey Stark, ten great-grandchildren: Abigail, Carter, and Liam, Macie, Carson, Tanner, and Harper Grace, Dylan, Gabriel, and Audrina. He is also survived by his second son, Stephen Robert Trampus, and one grandchild, and his last surviving cousin, Norma Houck. Likewise, Joe is survived by his stepson, Paul Read and wife, and two grandchildren, and his stepdaughter, Michelle and husband, and three grandchildren.
Condolences may be expressed to the family by visiting www.oakeys.com. Arrangements are by Oakey’s Roanoke Chapel (540.982.2100).