To share your memory on the wall of Julian Hart, sign in using one of the following options:

Julian attended Bob Jones Univ., became a Sergeant in the US Marines serving in active combat in Korea, and later graduated from VPI with a degree in Dairy Science.

He was a contract salesman traveling the NW and SE U.S. for more than 40 years. After raising 3 sons in Montana, he returned to VA in 1989 to eventually retire and devote full-time to his love of gardening.
There will be visitation at Oakey’s East Chapel on Friday, Nov 27 at 1 pm. Funeral services will follow at 2 pm. Private family graveside service to follow.

We cannot express enough our thanks and deep appreciation for the loving care, support, and compassion of Good Samaritan Hospice who helped care for dad in the past 4 months. God bless you all. In lieu of flowers, donations may be made to Good Samaritan Hospice, 2408 Electric Rd, SW, Roanoke, VA 24018.

To plant a memorial tree in honor of Julian Hart, please visit our Heartfelt Sympathies Store.

Receive notifications about information and event scheduling for Julian

The insignias listed here may be subject to copyright and/or trademarked. Those copyrights and trademarks are owned by the respective organizations.

We encourage you to share your most beloved memories of Julian here, so that the family and other loved ones can always see it. You can upload cherished photographs, or share your favorite stories, and can even comment on those shared by others.

Plant a Tree in Memory of Julian
Plant a tree 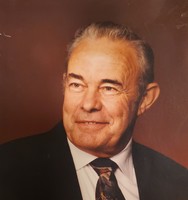