To share your memory on the wall of Michael Herbert, sign in using one of the following options:

Fr. Mike was born August 15, 1952 in Orrville, Ohio. He graduated from Orrville High School in 1970, John Carroll University (summa cum laude) in 1974 and the University of Michigan Law School (Order of the Coif) in 1977. He practiced law in both Wisconsin and Ohio until 1983 when he began a distinguished teaching career at the University of Richmond’s T. C. Williams School of Law until he resigned to enter seminary at The Theological College (Catholic University of America) in Washington, DC. After his 2005 ordination, Fr. Mike served several Virginia parishes, including Our Lady of Perpetual Help in Salem, Virginia, until previously undiagnosed heart disease forced him to retire in 2013.

He is survived by his brother and sister-in-law, John and Susan Herbert of Columbus, Ohio, sister and brother-in-law, Ann and Patrick Rodgers of Tinley Park, Illinois, nephews Lt. Col. William and Elaine Herbert of Alexandria, Virginia, Benjamin Herbert of Dallas, Texas, Sean and Judy Rodgers of Country Club Hills, Illinois and nieces Laura Herbert of Ann Arbor, Michigan and Mary Beth and Chris Valasek of Springfield, Illinois. His friends probably remember him best for his off-beat sense of humor and command of obscure trivia.

Receive notifications about information and event scheduling for Michael

We encourage you to share your most beloved memories of Michael here, so that the family and other loved ones can always see it. You can upload cherished photographs, or share your favorite stories, and can even comment on those shared by others.

Posted Dec 30, 2020 at 02:24pm
I was privileged to take Holy Communion to Fr. Mike every Monday. I missed seeing him during the pandemic. I will remember his wry sense of humor and his kindness always! May he rest in peace.
Comment Share
Share via: 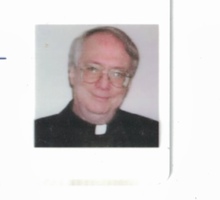