To share your memory on the wall of Paul Bridge, sign in using one of the following options:

Print
Paul Nicholson Bridge, 93, of Roanoke, passed away on Saturday, June 5, 2021. Paul was preceded in death by his parents, Samuel Hass Bridge and Jane Catherine McDonough Bridge, and by three brothers, John, William, and Charles.

Born in Beckley, West Virginia, Paul enlisted in the Army at age 17 to serve during World War II. Following his military service, he graduated from Mt. St. Mary’s College in Emmitsburg, Maryland. After a short-lived career as a journalist, Paul entered the Medical College of Virginia, earning a master’s degree in the first graduating class of hospital administration in 1955.

Paul loved Roanoke Memorial and its employees, and he was proud of his role in the growth of the hospital system that would become Carilion. During his tenure, Paul oversaw several programs, including mentoring the hospital administration residents and leading the legal team. His achievements include the establishment of the chaplaincy program, launching the Life-Guard helicopter service, overseeing the creation of the first cancer center for southwestern Virginia, and leadership of the merger of Roanoke Memorial and Community Hospital.

During his career, Paul served on the boards of the Medical Society of Virginia, the Virginia Hospital Association, and Blue Cross/Blue Shield. His community service included board roles at St. Andrew's Catholic Church and the Clean Valley Council, and membership in the Ancient Order of Hibernians. In his spare time, Paul loved to read, play golf, and travel with Frances. He was known by all for his easy-going manner and tremendous sense of humor.

The family would like to express our deepest gratitude to the staff of the Virginia Veterans Care Center and to Lindsay Valentine for their loving care of Paul during his final years.
Read Less

To plant a memorial tree in honor of Paul Bridge, please visit our Heartfelt Sympathies Store.

Receive notifications about information and event scheduling for Paul

We encourage you to share your most beloved memories of Paul here, so that the family and other loved ones can always see it. You can upload cherished photographs, or share your favorite stories, and can even comment on those shared by others.

Plant a Tree in Memory of Paul
Plant a tree 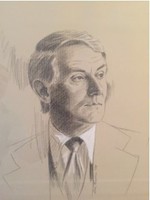