To share your memory on the wall of Rebecca Wright, sign in using one of the following options:

Receive notifications about information and event scheduling for Rebecca

There are no events scheduled. You can still show your support by sending flowers directly to the family, or planting a memorial tree in memory of Rebecca Wright (Franklin).
Plant a Tree

We encourage you to share your most beloved memories of Rebecca here, so that the family and other loved ones can always see it. You can upload cherished photographs, or share your favorite stories, and can even comment on those shared by others.

Posted May 09, 2020 at 02:12pm
Phillip & Melissa
We are so sorry to hear of the passing of your Mother. We used to be neighbors when we lived on Alberta Ave. My Mother and Father were John & Beulah Mason. Growing up I remember your parents, they always had a smile and were very friendly. Your Dad gave me my first airplane ride! I did not see them again after I was married in 1970 but have fond memories of cookouts at the Brotherton's & seeing them at Raleigh Court Methodist Church.
We know you will miss her greatly. God's blessings and good memories will see you through this difficult time.
Prayers are with you,
Babs Mason Miller
Comment Share
Share via:

Posted May 08, 2020 at 02:24pm
I had the privilege of providing physical therapy to Becky at Park Oak Grove. I thoroughly enjoyed getting to know her and spending time with her. She was so sweet and always had a beautiful smile on her face. I loved her paintings and hearing her pilot stories...especially her wrong turns! I’m so very sorry for your loss.
Kay Vest
Comment Share
Share via: 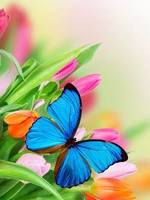