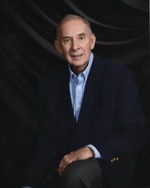 Richard Byrd Rader, 79, of Roanoke, Virginia, passed away peacefully on Friday, January 14, 2022 with his wife of 57 years by his side.


He served his country in the Army in Vietnam as a young man, before returning home to his native Roanoke to settle down and start a family. Richard was a charter member at Colonial Avenue Baptist Church where he contributed his time and talents as a deacon and choir member. He worked for Appalachian Power for 32 years, eventually retiring in 2004.


A funeral service will be conducted at 2 p.m. on Friday, January 21, 2022 at Oakey’s South Chapel with Rev. Melissa Scott and Rev. Laney Mofield officiating. Interment will follow in Blue Ridge Memorial Gardens. Friends are invited to visit with the family for one hour prior to the service. In lieu of flowers friends are welcomed to make contributions to Colonial Avenue Baptist Church.