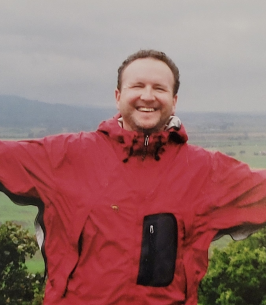 It is with extreme sadness that the family of Robert Delmar “Jay” Finch Jr., 55, of Roanoke, Virginia, announces his unexpected passing on Wednesday, December 15, 2021, after a short illness. Jay’s loud laugh, love of people, and brilliant humor made him a joy to be around, and he will be sorely missed by all who knew him.

The oldest of three brothers, Jay was born on March 17, 1966, to Dr. Robert “Bob” Delmar Finch and Kay Francis Banks Finch, in Nashville, Tennessee. He grew up in Martinsville, Virginia. After graduating from Martinsville High School in 1984, Jay attended James Madison University and graduated Magna Cum Laude in 1988. He attended T.C. Williams Law School at the University of Richmond and graduated in 1992. After practicing law in Richmond for several years, Jay accepted a job in Roanoke as a public defender. In 2002, Jay became a founding member of the Southwest Virginia Capital Defender’s Office. He served the public for two decades as Chief Deputy Capital Defender until very recently when capital punishment was abolished in Virginia. Jay was a well-respected and accomplished lawyer, and he served as a mentor to many younger lawyers over the years.

Jay was a kind, compassionate person who treated everyone with respect. He had the rare ability to make everyone around him feel important. He was a “big brother” to many and made friends everywhere he went.

He was a storyteller, a musician, an explorer, and a lover of rock ‘n’ roll. Most importantly, however, Jay was an adoring husband to his wife, Amy, and a devoted father to his son, Evin. Jay and Amy were married on October 6, 2001. They recently celebrated twenty years of happy marriage. On their twentieth anniversary, Jay said it best when he wrote, “To the most beautiful wife and mother in the world! It’s gone by too fast! She’s not mom to just one boy but sometimes two! Love you!”

They welcomed their son, Evin, on November 16, 2009. Evin was the joy of Jay’s life. Jay loved being a father to Evin. He took Evin on countless adventures with him from the time he was born. Jay was extremely proud of Evin and the bright, funny and kind young man Evin is becoming.

Jay was always willing to try new things. He loved music and hiking and was forever curious about the world. Jay’s unparalleled storytelling abilities and fantastic sense of humor made him a particularly magnetic and fun person to be around. One of Jay’s close friends described him as follows, “Jay told the best tales, and told them so well that you believed every word and hung on waiting for the next twist or turn. He would grin that big grin and swear to their authenticity. He had an answer for everything. If he didn’t, he made it up, got you wrapped in, thoroughly convinced it was true and then told you he was kidding.”

Jay greatly valued family. On many occasions, he would organize trips for his entire extended family to celebrate holidays or just as an excuse to get everyone together. Whether it was to “the best barbecue place I’ve ever been to in my life,” or a trip to West Virginia, he was always taking his nieces, nephews, and family friends on exciting adventures. He loved his parents and visited them often. Jay and his wife, Amy, enjoyed traveling all around the world. His spirit and enthusiasm for life were contagious.

Jay and his brothers, George and Brad, were very close, and they spent a great deal of time together. The brothers went on many adventurous camping and canoeing trips together. They traveled to Europe together, hiked the mountains of Virginia together, and enjoyed live music together. Most importantly, they got their children together often and fostered close and loving relationships between the cousins. Jay will forever live in the hearts of all of his family and friends.

Jay is survived by his wife, Amy Perry Finch, and their son, Evin Robert Finch. He was preceded in death by his father, Robert Delmar Finch. He is survived by his mother, Kay Banks Finch; his brothers, George Finch and Brad Finch; his nieces and nephews, all of whom he loved like his own; and by his in-laws, aunts, uncles, and cousins and by an incredible number of close friends who are too numerous to name.

A Celebration of Jay’s Life will be held at 11 a.m. on Monday, December 20, 2021, at Second Presbyterian Church in Roanoke, Virginia followed by a reception at the same location. The service will be live-streamed and can be viewed on the church’s website or YouTube channel.

In lieu of flowers, the family invites friends to make contributions to the Mountain Avenue Fund at Second Presbyterian Church.