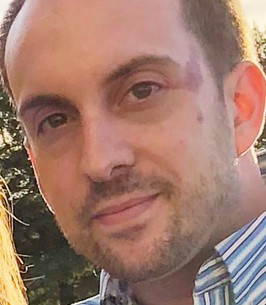 Cole was born on June 22, 1986, and raised in Vinton, Virginia, by his loving parents, Thomas Steven St.Clair and Terri Engle St.Clair, alongside his younger sister, Madelynn Paige S. Thompson. He graduated from William Byrd High School in 2004 and attended The Burton Center for Arts & Technology Criminal Justice Program. In 2006, he met the love of his life, Sandy St. Clair. They enjoyed 16 years together and were married on May 18, 2016.

Cole proudly worked for his father as an automotive mechanic at the family business, Steve’s Automotive Service Center in Vinton, Virginia. He will be remembered for his infectious laugh, free spirit, and heart of gold. His sense of humor was unmatched; he was often referred to as the funniest person everyone knew. He was known for his willingness to help anyone in need who crossed his path.

His legacy is one of extreme kindness, determination, and loyalty. He enjoyed classic cars, kayaking on the James River, taking Sunday naps with his cherished dogs, and spending time with his family. He was truly one of a kind and he will be missed forever by all that knew him.

He was preceded in death by his grandmother, Dorothy W. St.Clair; grandfather, Thomas W. St.Clair; and his beloved hound, Buddy.

Memorial donations may be given in Cole’s honor to Angels of Assisi. Online condolences may be shared with the family at www.oakeys.com.