To share your memory on the wall of Warren Miller, sign in using one of the following options:

Receive notifications about information and event scheduling for Warren

We encourage you to share your most beloved memories of Warren here, so that the family and other loved ones can always see it. You can upload cherished photographs, or share your favorite stories, and can even comment on those shared by others.

Posted May 20, 2020 at 04:21am
To the Miller Family-
Thanks for sharing your father with us. Grandfather Miller was a gentle man who at times had a sneaky side to him. I can recall some nights when I would go get his vitals signs. Thinking that he was asleep in his quiet low lit bedroom, I would be startled by his raspy greeting voice and smile after I got his vitals. Thanks again for allowing us to be his family until he could WAKE-UP-TO-SEE his wife and other family members. 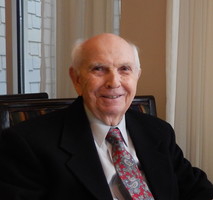