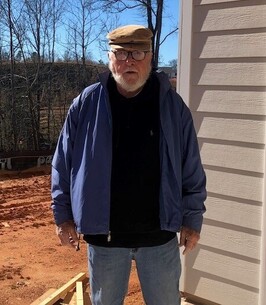 Wayne St. Clair, 88, of Vinton passed away on September 15. He was born in Bedford, Virginia to his late parents, Willie Aubrey and Shirley St. Clair, on November 5th, 1933.

Wayne served in the US Navy Seabees. Following his military service, he worked primarily in the trucking industry and retired 30 years ago. In his retirement, he enjoyed traveling with his wife and children, laughing with friends at the Vinton Moose Lodge, and playing poker with his buddies. To all of his friends at the Vinton Moose Lodge and AMVETS Roanoke, thank you for your friendship, loyalty, and support after our mother’s death 4 years ago, and all of the card games and jokes you shared with our Dad.

He was preceded in death by his wife of 64 years, and our beloved mother, Joyce St. Clair. He is also preceded by his brother, Willie Aubrey St. Clair, Jr.

Left to cherish his memory are his daughter, Lynn Harvey, his son, Mark St. Clair, and their spouses Brent Harvey and Rhonda St. Clair. He is also survived by his nephew David Workman and David’s wife Sandy Workman.

To honor his wishes, there will not be a memorial service. His ashes will be spread with his adored wife’s ashes in a private family celebration of his life. His loved ones will remember his sweetness and love for his family, his keen intelligence, and ever-present sense of humor. He would wish his friends to remember him as a tough poker player and think of him and his dry sense of humor when it’s time to shuffle up and deal.