To share your memory on the wall of Bruce Morrow, sign in using one of the following options:

Print
The greatest love story of our time is now complete. Bruce Morrow of Roanoke, Virginia, reunited with his soulmate, Juanita, on Wednesday, June 24, 2020.

He was a gentle giant with great compassion. Bruce could fix anything wrong with a... Read More
The greatest love story of our time is now complete. Bruce Morrow of Roanoke, Virginia, reunited with his soulmate, Juanita, on Wednesday, June 24, 2020.

He was a gentle giant with great compassion. Bruce could fix anything wrong with a car or a broken heart. He loved his family and friends deeply.

Bruce served his country in the United States Army, worked at Fred Hall’s Esso, owned his own wrecker service running Big Sam and Big Gert (which were named after his wife and mother-in-law), and finally bought Community Inn in January of 1977 which he and Juanita, with hard work and determination, turned that small business into one of Roanoke’s greatest hot-spots.

His favorite pastimes were going to Luigi’s to beat everyone at Wheel of Fortune and see his many girlfriends, stopping by Magic City Ford to check out the latest cars and grab a hot cup of coffee and talk with his buddies, entering the bank on Mondays and Fridays and beating the employees saying, “Welcome to Wells Fargo,” and spending a month in Florida with his family during the summer.

Bruce is survived by his sisters, Jackie Hall and Barbara Hobbs; his children, Steven, Deana and Tom, and Mont and Melanie; his adopted children, Debbie, David , Jay, and Karen; grandchildren, Michael and Robyn, Matthew and Hannah, Megan and Josh, and Josh; great-grandchildren, Ethan, Arlen, and soon to be Leighton Grace, who Bruce affectionately named Raymona Montia; and his wonderful employees who he thought of as part of his family.

Online condolences may be made at www.oakeys.com or at the Facebook Page of The Community Inn.
Read Less

Receive notifications about information and event scheduling for Bruce

There are no events scheduled. You can still show your support by sending flowers directly to the family, or planting a memorial tree in memory of Bruce Dean Morrow.
Plant a Tree

We encourage you to share your most beloved memories of Bruce here, so that the family and other loved ones can always see it. You can upload cherished photographs, or share your favorite stories, and can even comment on those shared by others.

Posted Jun 30, 2020 at 11:19am
Mont and Melanie,
We are praying for your family in this time of loss. It's been a tough time, and Tony and I pray that God will provide you the comfort and strength you need in the coming days. 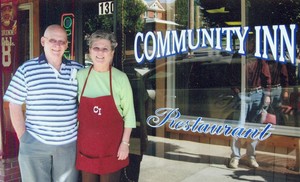