To share your memory on the wall of Frances Puckett, sign in using one of the following options:

After she graduated from Garden High School in Oakwood, she furthered her education at Roanoke Memorial Hospital and earned her Registered Nurse Pin in 1957. After graduating, she worked for many years in the neonatal nursery helping newborns. For her older patients, she would constantly look over them during the evenings. While on duty as a nurse, she would do a bed check and take a flashlight and shine it into the patients’ rooms to make sure everyone was in bed and safe. When she was out of town visiting family, she would do the same thing with her young nieces and nephews making sure they were “tucked in and safe” when it was bedtime because she said “you never know.”

She left nursing and worked for the Boy Scouts of America in Roanoke as a bookkeeper until she retired. She was also a primary caretaker for her aging parents.

Frances was preceded in death by her parents Archie and Laura Puckett of Roanoke, Va. and by her younger sister Rowena Puckett Perry of Oak Hill, WV. Left to cherish her memory are a brother, Daniel Levi (Alma) Puckett, of Columbus, OH; a sister, Shirley Puckett Mooney of Raleigh, NC., and several nieces and nephews. Frances never married or had children.

Frances used her caring hands and watchful eyes by helping her community worship the Lord and care for the sick and dying. The Lord was always watching over Frances. Now the Lord is holding Frances in his caring hands.

There will be no funeral service. A graveyard service will be held at Sherwood Memorial Park in Salem, Friday, June 12, 2020 at 10 a.m., where she will be buried next to her loving parents. Arrangements by Oakey’s Roanoke Chapel.
Read Less

To plant a memorial tree in honor of Frances Puckett, please visit our Heartfelt Sympathies Store.

Receive notifications about information and event scheduling for Frances

We encourage you to share your most beloved memories of Frances here, so that the family and other loved ones can always see it. You can upload cherished photographs, or share your favorite stories, and can even comment on those shared by others.

Plant a Tree in Memory of Frances
Plant a tree 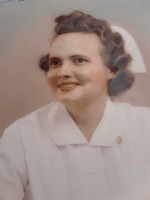